The other evening I attended Congrepation Beit Simchat Torah (CBST)’s 25th Anniversary Celebration “Bringing Vision to Life.”  The event was to celebrate 25 years of Rabbi Sharon Kleinbaum,D.D. unwavering dedication to the CBST community and all funds raised funds are to benefit the completion of Congregation Beit Simchat Torah which is called Home of Our Own Capital Campaign.

Now the event started at 7 pm and was held at Fashion Institute of Technology (FIT), 7th Avenue and West 27th Street.  Hillary Rodham Clinton was the Keynote Speaker and Andy Cohen and Cynthia Nixon were co-hosts.

So the evening began with Psalm 150 called Halleluyah and was sung by the CBST Community Chorus.  Then Dr. Nathan Goldstein,  President of CBST Board of Directors addressed the audience.

Then there was an introduction by Andy Cohen and Cynthia Nixon.

Following that there was an amazing performance  of Aaron Copeland’s Lincoln Portrait by The Greenwich Village Orchestra with Adria Benjamin, Conductor and the narrative was read by Molly Wenig Rubenstein, Liba Wenig Rubenstein, Randi Weingarten, and Rabbi Kleinbaum. 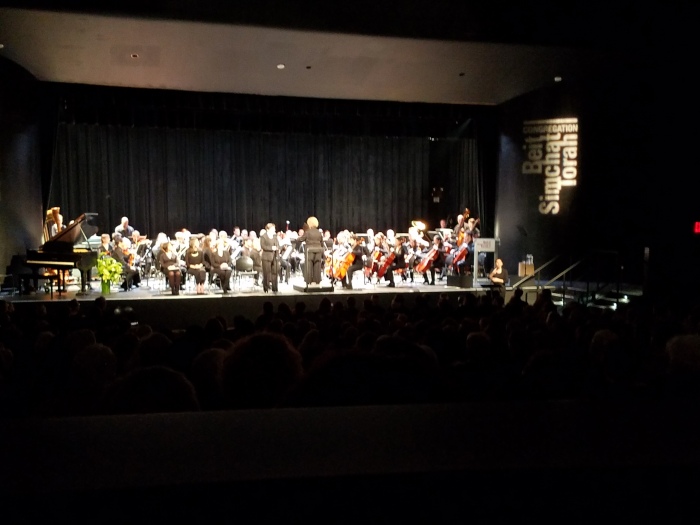 Then the amazing evening continued with an introduction by Jonathan Green and Rabbi Kleinbaum of The Honorable Hillary Rodham Clinton.  I found Ms. Clinton’s speech both very down to earth and very inspiring and then Ms. Nixon and Mr. Cohen readdressed the audience and introduced a video called Bringing Vision to Life created by Filmmaker Katherine Linton which highlighted Rabbi Kleinbaum’s last 25 years as the Rabbi of CBST.

Then the evening ended on stage with Rabbi Kleinbaum’s “Reflections” which I found to be so very heartfelt and inspiring that I think that every American citizen should have heard her message as well!!!!!

The evening then ended with in a reception downstairs from the auditorium.

It was an evening filled with Hope, Acceptance and most importantly Joy!!!  CBST does represent the best vision of America possible.  I felt blessed to have attended.