What a fun night!  I had the privilege to attend Jewish Veg’s 40th Anniversary Celebration.  The event took place at Hebrew Union College which is located at 1 West 4th Street, New York.

Now at this point I will share with you that I’m not a vegan or a vegetarian because I do love my chicken dishes.  However, I can totally appreciate and respect an individual’s choice to pick a particular food choice “management” lifestyle.  And so here’s to choice!!!

So coming from that place, again though not a vegan or vegetarian I am a very curious person. So I decided to see where for Jewish individuals the importance of being a vegan or a vegetarian came from.

So below is what I found quoted on www.jewishveg.org‘s web site and that gave me the information I needed to understand why their choice was an important choice for them.

“And God said: “Behold, I have give you every herb yielding seed which is upon the face of all the earth, and every tree that has seed-yielding fruit–to you it shall be for food.” (Genesis 1:29)”

In addition the web site went on to share…

There is no disputing that, according to the Torah, God asked human beings to be vegans in his very first conversation with Adam and Eve.

In fact, God issued those instructions right after he gave humans “dominion” over the animals..

So it is clear that “dominion” does not include killing animals for food.

“Living creatures,” Nachmanides wrote, “posess a moving soul and a certain spiritual superiority which in this respect make them similar to those who possess intellect-human beings and they have the power of affecting their welfare and their food and they flee from pain and death.”

Another great Medieval sage, Rabbi Joseph Albo, offered an additional reason. “In the killing of animals there is cruelty, rage and the accustoming of oneself to the bad habit of shedding innocent blood,” Rabbi Albo wrote.  Immediately ater giving these dietary instructions, God saw everything that he had made and “behold, it was very good” (Genesis 1:21).  Everything in the universe was as God wanted it, with nothing superfluous and nothing lacking, a complete harmony.  Veganism was part of that harmony.

Today, some of our prominent rabbis are vegan or vegetarian, in accordance with the Torah ideal.  And it is no coincidence that a vegan diet is the simplest way to be kosher.

So now here are some photos from this wonderful event…

Below in photo #1 you’ll meet with Jeffrey Cohan who is the Executive Director of Jewish Veg www.jewishveg.org.

In photo #2 you’ll meet Zvika Bendet who is CEO of Nature’s WitLLC . Zvika’s company serves to market and distribute Snack-Less Products which contains Hoodia Parviflora and which is grown in Israel.  Hoodia is reported to curb one’s appetite because as I read on their web site www.snack-less.com “Normally when we eat glucose levels rise.  This increase is sensed by the brain’s hypothalamus, which registers the ” I’m full” message, so we stop eating, typically about 20 minutes later.  Like blood sugar, Hoodia signals the brain that the body feels full and satisfied but Hoodia works faster to signal the hypothalamus that you’re full. So you’ll eat less. 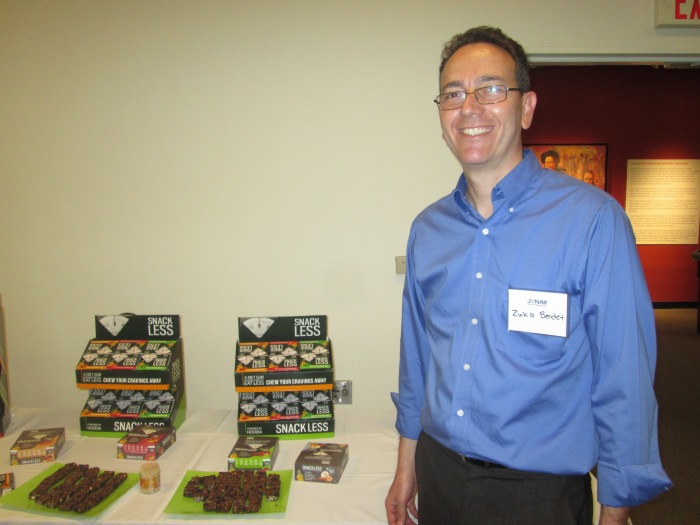 And below are some of the foods that were part of the cocktail hour and which I tried.  They were catered by The Organic Grill www.theorganicgrill.com which is located at 123 First Avenue between 7th and 8th Avenue, New York.

So if you’d like to learn more about being a Vegan or a Vegetarian then check out www.jewishveg.org and find out more about this wonderful organization today!